This course will create professional law enforcement coaches not instructors. 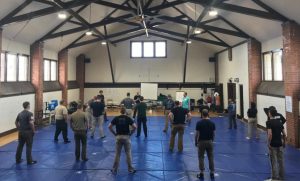 As a veteran police officer with twenty-one years on the force, I have been trained and instructed by many different people on a wide variety of topics over the years.

Most of the “instructors” and their material was forgettable to say the least and even fewer left a lasting impact on me. However, there were a few people I had come across that were different. These people were more interested in my performance, my ability to do the techniques or skills properly and seemed genuinely interested in the outcomes.

As I progressed through my career, handling critical calls in which decisions had to be made in split seconds with little to no time to gather supporting information. I realized how many times in training I had lost in these exact scenarios, how many times I had failed and how little positive reinforcement we had received. I started to take inventory of the training I received and provided and was saddened by what I saw.

I saw officers trained to be in a constant state of fear.

Officers trained to lose in scenario after scenario, yet expected to perform in these situations in real life. I knew if we began to coach officers like athletes, in which our reputation and evaluation was tied to how they performed, we would train them differently. We would coach them to handle fear, to learn from mistakes in training, to create success to breed confidence in them and us.

This realization led to me forming Team Hardy and our courses based on creating confident, mindful officers that are coached to succeed with our techniques and skills. We teach tactically sound, fundamentally solid skills that officers, agency leaders and communities will have confidence in and respect. No more instilling fear and failure into our officers then expecting different outcomes in the field.

I was visiting a regional training academy checking on our recruits as part of my job. It was a defensive tactics day and the new officers were being taught ground escapes. This was an area I had specialized in, so I paid close attention. The technique the recruits were showed was serviceable for a skill but there was no mindset discussion or preparation associated with it. I watched as the two instructors demonstrated the technique several times before sending the recruits off to practice their reps.

I could not help but notice the female recruits, including two from my agency went to the far corner of the room with several other females. There was no instructor in the group with them and they were obviously not confident in what they were practicing. I walked over to the group and started prompting them with some “why” questions, so they could understand the importance of the technique. I spent about an hour helping them get the technique down and could see their confidence increase. In this group was an officer from another agency, Officer EF*.

Fast forward a couple year and EF, applied with our agency and was hired as a lateral officer. I was the academy coordinator and spent two weeks with EF and her class teaching them our agency’s defensive tactics. The bond we had developed at the state academy served us well and her confidence increased exponentially.

In July 2017, EF was involved in a critical incident in which she forced to shoot a male charging another officer with a knife. EF made life saving decisions in split seconds, with no time to think, only her training to fall back on.

At 0430 that morning, following her interviews and processing, I received a text from EF telling me this “I wanted to thank you for all your coaching. I heard your voice talking to me step by step through the incident”.

This testimony is an example of how we know “coaching” works. I had never taught EF a class on firearms. I had never spent one minute on the range with her or coached her through one qualification. However, what we did was coach her to be confident in her skills, her preparation and herself.

Our goal is to keep as many officers safe, well trained and prepared as possible.

This defensive tactics course will certify your officers as coaches in our system with the understanding that we are not training to survive, we are training to WIN!

If your agency is interested in hosting an Coaches Certification course we have a financial incentive packages available.  Please contact us today to schedule our course in your area!

Register For A Course Now

**** REGISTER FOR THIS CLASS DIRECTLY THROUGH MLEA

*Contact us for more information on how to get registered or host your own class.